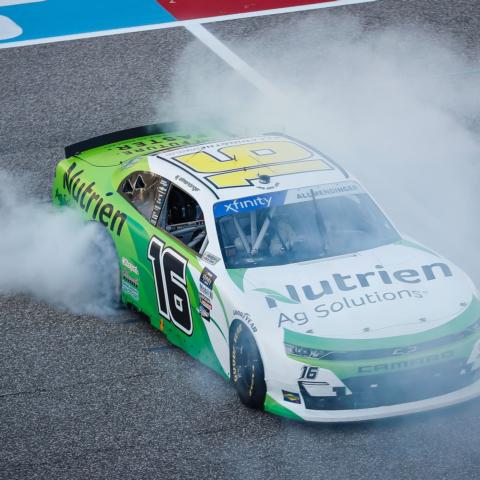 Kaulig Racing's A.J. Allmendinger does a burnout after winning the Pit Boss 250 NASCAR Xfinity Series race at Circuit of The Americas on Saturday, capping a doubleheader at the famed 3.41-mile circuit. Harold Hinson Photography

A.J. Allmendinger was the class of the field in Saturday’s Pit Boss 250, holding off a hard-charging pack of drivers to take the checkered flag by 2.039 seconds. The donnybrook capped off an action-packed day of white-knuckled excitement at the 20-turn, 3.41-mile Circuit of The Americas (COTA).

“We’ve had a good start to the year when you look at the finishes, but we hadn’t really contended for the win,” Allmendinger said. “Last year, Kyle beat us down pretty good. This race is a tough race. It’s a long race. The track is slick. As we saw in the truck race, if you get a late caution, anything can happen.”

Allmendinger led a race-high 27 laps and battled most of the afternoon with NASCAR Cup Series (NCS) regular Ross Chastain en route to the victory. Chastain, who led three times for 14 laps, got spun by Landon Cassill with seven laps remaining and was relegated to a 17th-place finish.

“Ross was doing an amazing job,” Allmendinger said. “It was going to be tough to beat him. Once he got spun, I was just praying for no more yellows.”

COTA is the sixth different road course on which Allmendinger has won during his career. That streak includes seven Xfinity Series (NXS) wins and two NCS wins. The Los Gatos, Calif. native has finished fourth or better in 15 of 18 NXS road course races.

With the victory, Allmendinger moves to within one point of Noah Gragson in the point standings.

“It was a solid effort,” Hill said. “I’ve always felt like I can get around road courses. I felt like that last year at Watkins Glen. It gave us confidence coming here. It shows that we can run with A.J. We’ll go back and debrief and see where I can be better as a driver.”

After battling back from a speeding penalty earlier in the race, Cole Custer finished third. Gragson and Sam Mayer rounded out the top five finishers.