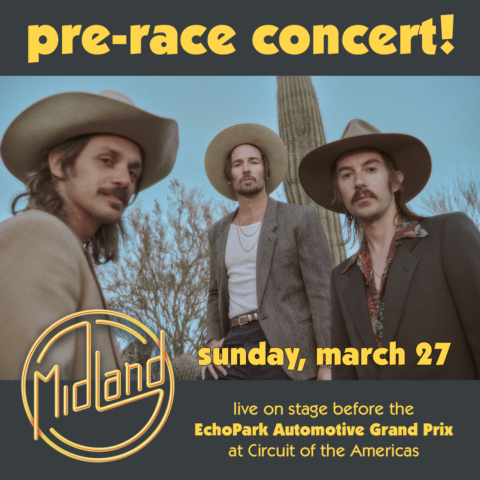 Midland, the GRAMMY® Award-nominated band that hails from nearby Dripping Springs, Texas, will highlight the race weekend entertainment with a special concert prior to the EchoPark Automotive Grand Prix NASCAR Cup Series race on Sunday, March 27 at Circuit of The Americas.

Midland will perform a full one-hour set featuring their critically acclaimed hits on the venue’s frontstretch stage beginning at 12:45 p.m. CT. The concert will be the centerpiece of pre-race activities for the second running of the EchoPark Automotive Grand Prix, which begins at 2:30 p.m. (TV: FOX, Radio: PRN, SiriusXM).

NASCAR at COTA is offering fans premier access to enjoy the Midland concert and NASCAR Cup Series driver introductions with the purchase of a Track Pass ticket upgrade for only $59. While the pre-race concert is free with any race ticket, Track Pass holders will move from the grandstands to the front of the stage for the high-energy musical performance, driver question-and-answer sessions and driver introductions.

Lead vocalist Mark Wystrach fronts Midland’s rich sound that is rounded out with lead guitarist/vocalist Jess Carson and bass player/vocalist Cameron Duddy. The Texas band is rooted in their hometown’s tradition in both sound and style, and the trio’s Gold-certified debut album “On the Rocks” was declared “the year’s best Country album” by The Washington Post.

Fans can sing along to their 2x Platinum-certified, chart-topping debut single “Drinkin’ Problem,” which offers an intentional nod to country music reminiscent of the 1970s and ‘80s. The toe-tapping song earned the band their first GRAMMY® Awards nominations for Best Country Song and Best Country Duo/Group Performance.

“We love coming home to Austin, nothing beats the electricity of the city. To play at NASCAR at COTA will be fantastic and we look forward to seeing our fans on race day," said Midland's Cameron Duddy.

Fans can make the most of the weekend by staying in one of the many camping options. Fans who want to stay close to the action all weekend can reserve a camping spot and wake up mere steps away from all the racing action of their dreams. Campground spaces start at just $100 and will be open from 10 a.m. Thursday, March 24 through 12 p.m. Monday, March 28.

Tickets:
Tickets for the March 25-27 NASCAR at COTA tripleheader weekend are on sale now at NASCARatCOTA.com/Tickets. Three-day weekend packages for adults start at just $99 and just $10 for kids 12 and under. Further details can be found on the NASCAR at COTA website including the full race weekend schedule.