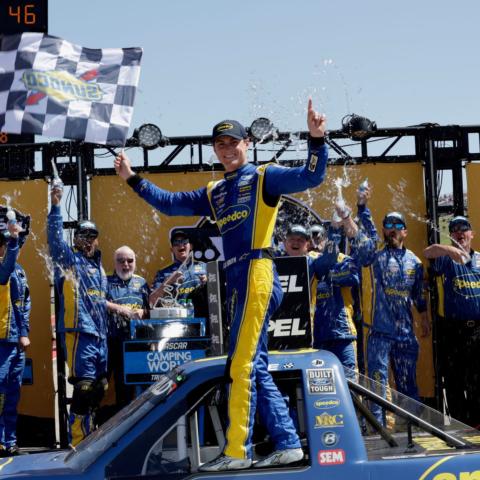 Zane Smith weaved through a late-race wreck that took out the top three contenders in double-overtime to claim the checkered flag in the XPEL 225 Camping World Truck Series race at Circuit of The Americas. Harold Hinson Photography

Four drivers, two overtimes and one corner created a finish for the ages as Zane Smith took the checkered flag in the wild XPEL 225 Camping World Truck Series (NCWTS) race at Circuit of The Americas (COTA) on Saturday.

Kyle Busch led a race-high 31 laps, but Smith led the one that mattered, coming from fourth to first through the tricky turn 11 hairpin in the second and final overtime. Busch was collected in a crash that also took out contenders Alex Bowman and Stewart Friesen and opened the door for Smith to sweep both stages and take home the victory.

“Truck races are crazy,” Smith said in victory lane following the win, his second of the young season. “You’re never out of it until you’re out of it. That was a wild one.

“Any truck win you can get feels so great, especially when it happens like that in such dramatic fashion. It’s a huge statement from this team. Every single race this year, I’ve been in contention to win.”

Busch, who leads the NCWTS with 61 career wins, seemed destined to earn his first-ever truck series victory on a road course after pulling away from the field late, but the crash relegated him to a third-place finish behind Smith and John Hunter Nemechek.

“Great race all day,” Busch said, crediting his team for giving him a fast Safelite Toyota Tundra. “It doesn’t matter if you deserve it or not, you’ve got to be the first one to the checkers and we were not.”