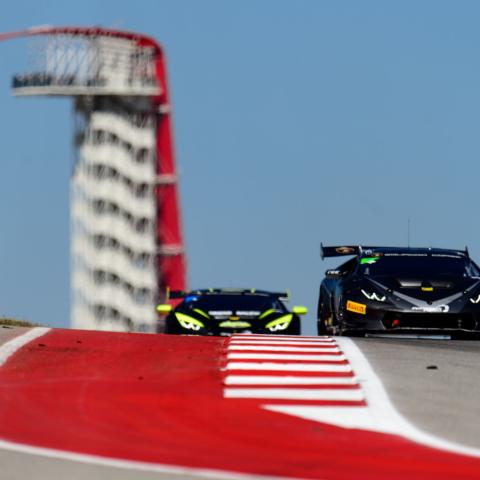 Lamborghini Super Trofeo North America represents the most exciting single-make GT car series on the continent. The series is sanctioned by the International Motor Sports Association (IMSA), which oversees regulation and operation of six professional sports car racing series and part of the NASCAR family. Teams and drivers compete in identically prepared Lamborghini Huracán Super Trofeo Evo cars. Boasting more than 600 horsepower and advanced aerodynamics for slick cornering, the lightning-quick Huracáns are ideally suited to put on a memorable show on the world-class COTA road course.

Each weekend round consists of a pair of 50-minute races preceded by two practices and qualifying. Every car must make a mandatory pit stop during each race, coming within a time window that opens 20 minutes after the race start and closes 10 minutes later.

Cars in the Pro, Am and LB Cup classes may use one or two drivers in the race. ProAm class entries must have two drivers. Entrants with two drivers must make a driver change during the mandatory pit stop, which must be at least 90 seconds if there are two drivers and 93 seconds for a solo driver.

Among the drivers to watch are Steven Aghakhani and Jacob Eidson, who are looking to advance one position in the Pro class after finishing just three points shy of winning the 2020 championship. Randy Sellari won the LB Cup championship last year and moves up to the Am class in 2021.

This year’s Lamborghini Super Trofeo North America schedule calls for rounds at some of the country’s most respected permanent road courses. Following COTA on the 2021 calendar will be stops at Watkins Glen International, Road America, VIRginia International Raceway and Mazda Raceway Laguna Seca.