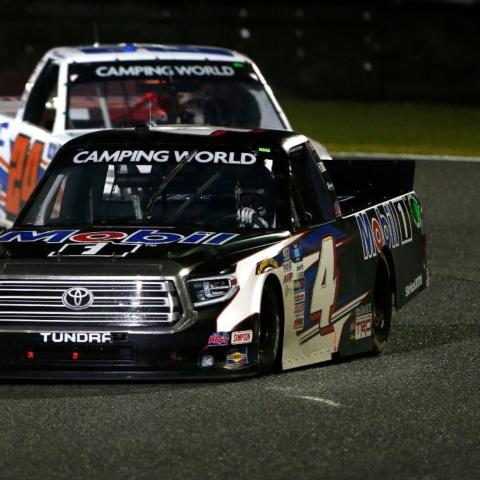 Kyle Busch Motorsports' John Hunter Nemechek (4) has scored two victories and posted five top-five finishes to lead the NASCAR Camping World Truck Series points standings early in the season. He will be one of the favorites to win the Toyota Tundra 225 Saturday at Circuit of The Americas in Austin, Texas. 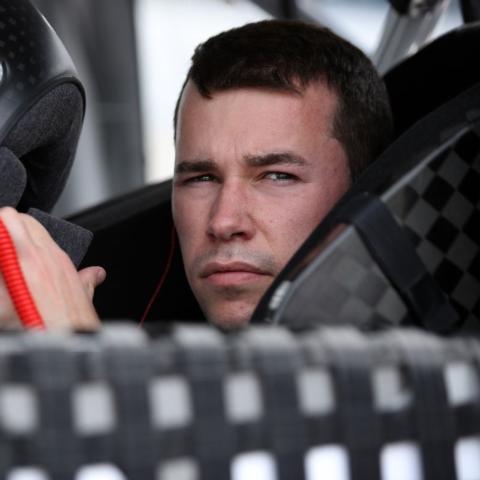 Ben Rhodes of ThorSport Racing opened the Camping World Truck Series season with back-to-back victories at Daytona, including a win on the Daytona road course. The driver of the No. 99 Toyota will be one to watch during this weekend's Toyota Tundra 225 at Circuit of The Americas. 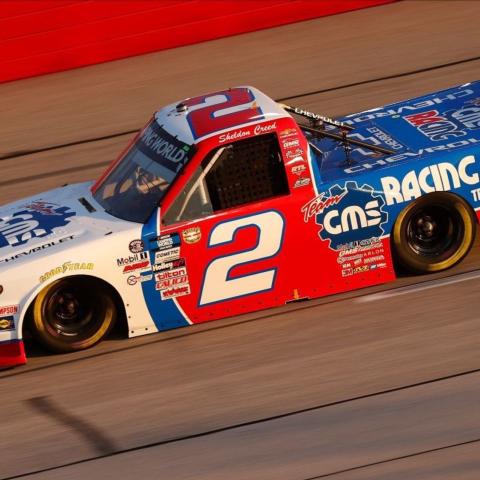 Defending NASCAR Camping World Truck Series champion Sheldon Creed won the 2020 season's only road course race, at Daytona. Creed will be after another win on the road this weekend at Circuit of The Americas 3.41-mile, 20-turn layout at the controls of his No. 2 Chevy for GMS Racing.

Kyle Busch Motorsports has been flexing its collective muscle all season long in the NASCAR Camping World Truck Series. The team has combined to win five of the eight races this season and will look to add another trophy to the collection with a strong showing at the Toyota Tundra 225 at Circuit of The Americas (COTA). The much-anticipated race will be broadcast live by FS1 and MRN Radio when the green flag drops Saturday, May 22 at noon CT.

The KBM team has been led by its flagship, full-time No. 4 truck driven by John Hunter Nemechek, who has raced to victories at Las Vegas and Richmond, posted five top-five finishes and leads the series points standings. Team owner Kyle Busch, who competes in a limited number of Truck races, claimed victories at Atlanta and Kansas, and his fellow Joe Gibbs Racing teammate, Martin Truex Jr., hopped into the cockpit of the team’s No. 51 truck in March at Bristol Motor Speedway and grabbed the win on the dirt.

At COTA, the team will be led by Nemechek along with Chandler Smith in the No. 18 and Texas native Parker Chase, a regular in IMSA racing, who will pilot the team’s No. 51 machine.

Nemechek, who has one win and three top-fives on road courses in his Truck career, says he enjoys the demanding 3.41-mile, 20-turn COTA layout. He visited the track last month during a media preview event.

“This brings a lot of different road courses together," Nemechek said. "It's fast, technical, a really nice mixture of places we've been. A driver's racetrack.”

Nemechek and the KBM team will have plenty of challengers for the victory, starting with veteran driver Ben Rhodes, who swept both Daytona races this season including one on the track’s road course circuit.

Rhodes, who drives the No. 99 Toyota for ThorSport Racing, has also scored a pair of second-place finishes this season, at the Bristol dirt race and the recent visit to Darlington. He is currently second in the points standings.

Last year’s winner of the Truck Series’ only road course event was Sheldon Creed, who won at the Daytona Road Course and went on to win the season championship in his No. 2 Chevy fielded by GMS Racing. He recently won his first race of the season by holding off Rhodes at Darlington and was the second-place finisher to Rhodes at the Daytona Road Course race in February.

Local favorite Austin Wayne Self, a native of Austin, will definitely have the home-field advantage during the event. Self has a couple of top-10 finishes this season, at Bristol and Darlington, in his No. 22 family-owned AM Racing Chevy Silverado and will draw support from his fellow Texans.

Another Austin resident, sportscar racing champion Cameron Lawrence, will make his Truck Series debut during the weekend. Lawrence, who has competed in the 24 Hours of Daytona and the Trans Am Series, will drive the No. 33 Chevy for Reaume Brothers Racing.

“The magnitude of this opportunity is incredible, and I feel fortunate to be making my debut in the NASCAR Camping World Truck Series at my home track, Circuit of The Americas,” Lawrence said. “I spend a lot of time at Circuit of The Americas, whether it’s racing or coaching, and I’m confident in my local knowledge… I’m hopeful this opportunity will foster future growth with Reaume Brothers Racing in the Camping World Truck Series.”

Several other road course racing specialists are also entered in the race through CMI Motorsports, including Sports Car Club of America racer Brad Gross driving the No. 83 Chevy, Trans Am racer John Atwell driving the No. 49 Chevy and international road racer Samuel LeComte of France piloting the team’s No. 72 truck.

Seven of the drivers entered in the Toyota Tundra 225 have Texas roots. In addition to Self and Lawrence, Logan Bearden, who will drive the No. 44 Niece Motorsports entry, is also an Austin native. KBM’s Parker is from New Braunfels, Atwell is from Azle, Gross is from Grapevine and Cory Roper, who drives the 04 truck, is from Vernon.

Former Cup Series racer Paul Menard will come out of retirement to compete in a NASCAR Truck race for the first time since 2007. Menard, who retired from full-time NASCAR Cup Series racing two years ago, will drive the No. 66 Toyota for ThorSport Racing. Menard has scored wins in both the Cup and Xfinity Series in his career and will try to become the 37th different driver to score trophies in all three of NASCAR’s major touring series.

Others to watch among the full-time Camping World Truck Series drivers are three-time champ Matt Crafton and another past champ, Johnny Sauter. The list of contenders at the top of the points order includes Grant Enfinger, Austin Hill, Stewart Friesen, Zane Smith, Tanner Gray, Todd Gilliland, Sam Mayer and rookie Hailie Deegan, who drives the No. 1 truck for Gilliland Racing.

Race weekend action gets underway on Friday with practice sessions scheduled for the NASCAR Xfinity and Camping World Truck Series. On Saturday, qualifying will be held for both Xfinity and Truck teams to set the starting lineups for their races later that day. Saturday’s Toyota Tundra 225 Camping World Truck Series race will be followed by the Pit Boss 250 Xfinity Series race at 3 p.m. CT (FS1, PRN Radio). On Sunday, the NASCAR Cup Series teams will qualify at 10 a.m. to set the field for the EchoPark Automotive Texas Grand Prix, which takes the green flag at 1:30 p.m. (FS1, PRN Radio).

To obtain more information about the NASCAR weekend, download facility and parking maps and check out a list of FAQs about the event, please click here.