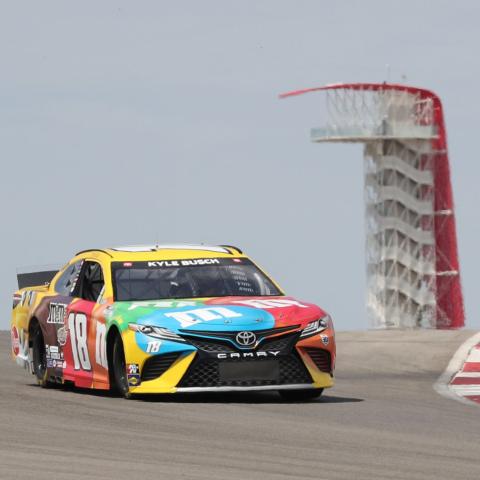 Let’s take a quick lap through some of the basics of NASCAR racing that may answer some questions you have about the sport and help you better enjoy the overall weekend.

The National Association for Stock Car Auto Racing (NASCAR) is the sanctioning body for one of the premier sports in America and the premier stock car racing series in the world. Founded Dec. 14, 1947, when Bill France Sr. organized a meeting at the Streamline Hotel in Daytona Beach, Fla., to discuss the future of stock car racing. It was on that day that the National Association for Stock Car Auto Racing (NASCAR) was conceived. The first race was held on Feb. 15, 1948, on a beach/road course in Daytona Beach, Fla., and won by Red Byron in a Ford. NASCAR operates three national series: The NASCAR Cup Series, NASCAR Xfinity Series and NASCAR Camping World Truck Series. NASCAR also oversees various regional racing series, which provide a feeder system for NASCAR’s three national series. NASCAR delivers programming to dedicated viewers worldwide in more than 185 countries and territories. NASCAR headquarters have been located in Daytona Beach, Fla., since its inception in 1948. Additional offices are in New York City, Los Angeles, Charlotte, N.C., Concord, N.C., Conover, N.C., Bentonville, Ark., Mexico City and Toronto. NASCAR currently is led by Jim France, who serves as chairman and chief executive officer.

The NASCAR Cup Series consists of 36 points races at 23 venues in 19 states covering every major region of the country. The series is contested on 29 various-sized ovals, including a dirt event at Bristol Motor Speedway, and seven road courses, including the Circuit of The Americas. Overall, NASCAR, through all its series, reaches across the Americas with more than 1,200 events in more than 30 U.S. states, Canada, Mexico and Europe.

The NASCAR Cup Series is currently using the Gen-6 car, which debuted in 2013.The chassis consists of a steel tube frame with an integral roll cage and is covered with sheet metal. The car weighs 3,200 pounds without driver or fuel and has a wheel base of 110 inches. It is powered by a 5.86-liter, V8 naturally aspirated engine that uses Sunoco Green E15 fuel. The cars have a four-speed manual transmission and also has a manual reverse option.

NASCAR has three vehicle manufacturers – Chevrolet, Ford and Toyota – in each of its national series (Cup, Xfinity and Camping World Truck Series) with each using a specific model for the competition. In the NASCAR Cup Series, Chevrolet showcases the Camaro ZL1 1LE while Ford features the Mustang and Toyota the Camry. Each manufacturer has to meet NASCAR specifications and requirements to ensure an equal and competitive playing field.

The current Gen-6 car will be replaced by the “Next Gen” version beginning with the 2022 season.

Goodyear is the official and sole tire supplier of NASCAR. All vehicles in all three NASCAR national series utilize slicks (no treads) for races on ovals and road courses. Due to the slick-style tires, NASCAR is unable to conduct on-track action when there is any form of precipitation affecting the track conditions.

NASCAR, however, can run in inclement weather on road courses like the Circuit of The Americas as a result of Goodyear producing treaded rain tires. Treaded tires would be ineffective on ovals due to speeds and banking and would shred easily. In addition to the treaded tires, vehicles for the road courses can be equipped with a front windshield wiper to assist the driver’s visibility.

As we all know, the driver who takes the checkered flag leading the final lap is the race winner. NASCAR, however, has divided its races into three stages (the Coca-Cola 600 at Charlotte Motor Speedway is the exception with four) to allow drivers to earn additional points. The top-10 finishers of the first two stages will be awarded points while the winner of either of the first two stages will receive one playoff point and the race winner will receive five playoff points.

The conclusion of the first two stages of a race will be signified by the waving of a green checkered flag and followed by a caution period. Most of the time the entire field will pit for fuel and tires to prepare for the start of the next stage. The running order is based off any drivers who may have stayed out during the caution followed by those coming out of the pits the quickest.

The following is the stage breakdown for this weekend’s NASCAR tripleheader:

All starts and restarts are signified by the green flag. At the initial start of the race, the number two starting position may not beat the number one starting position to the start/finish line. Once the green flag is displayed on a start or restart, all vehicles must maintain their respective track position/lane until they have crossed the start/finish line. All restarts are made within a designated restart zone on the track. The race leader controls the restart within the restart zone. If the leader does not restart by the time he/she reaches the exit (single red line) of the restart zone, the flag person will restart the race.

Five crew members are routinely allowed over the wall to perform a pit stop. Responsibilities for crew members consist of front and rear tire carriers, front and rear tire changers along with a jackman and fueler. A sixth member is allowed over the wall for a pit stop later in the race with the responsibility of cleaning the windshield and assisting the driver only. The number of pit stops during a race vary due to numerous factors including race length, caution flags, fuel mileage, tire wear and pit strategy.

After the yellow caution flag is displayed, the first eligible vehicle one or more laps down will be given one lap back. Unless otherwise authorized by NASCAR, the eligible vehicle can only add fuel on the designated lap. A vehicle is not eligible to receive the “Free Pass” if the vehicle was involved in or the reason for the caution. Under these circumstances, the “Free Pass” will not be awarded to any vehicle.

Unlike many other major racing series, NASCAR employs an “overtime” in all three national series to ensure that the race finishes under green conditions rather than a caution. It is commonly called a green-white-checkered flag finish, which is basically a dramatic two-lap shootout for the victory. If the field is unable to successfully complete the two-lap overtime due a reason such as a caution coming out before the leader passes the start/finish line on the first lap under green, NASCAR will conduct multiple attempts to achieve a finish under green-flag conditions. Once a valid attempt is achieved (clean restart), it will become the only attempt at a green-white-checkered finish. If a caution comes out at any time during the valid green-white-checkered attempt, the field will be frozen and the checkered/yellow or checkered/red displayed to cars at the finish line.

The NASCAR Cup Series playoffs are competed over the final 10 races with 16 drivers and four rounds – Round of 16, Round of 12, Round of 8 and Championship 4. A victory in the first 26 races all but guarantees a berth in the playoffs. The number of playoff drivers in contention for the championship will decrease after every three playoff races, from 16 to start; 12 after race No. 3; eight after race No. 6; and four after race No. 9. A win by a championship-eligible driver in any playoff race automatically clinches the winning driver a spot in the next playoff round. Four drivers will enter the Championship Race with a chance at the title, with the highest finisher among those four capturing the prestigious NASCAR Cup Series championship.

The top 15 drivers with the most wins over the first 26 races will earn a spot in the playoffs – provided they have finished in the top 30 in points and attempted to qualify for every race. The 16th playoff position will go to the points leader after race No. 26 if he/she does not have a victory. In the event that there are 16 or more different winners over 26 races, the only winless driver who can earn a playoff spot would be the points leader after 26 races. If there are fewer than 16 different winners in the first 26 races, the remaining playoff positions will go to those winless drivers highest in points. If there are 16 or more winners in the first 26 races, the ties will first be broken by number of wins, followed by points.