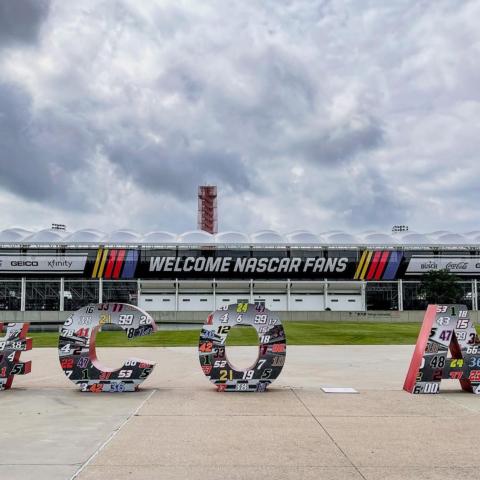 What: The NASCAR Cup Series is making its first visit to Circuit of The Americas in Austin, Texas, for the inaugural EchoPark Automotive Texas Grand Prix. The race is one of seven road courses on the 2021 NASCAR Cup Series schedule. The weekend also will feature racing in the NASCAR Xfinity Series with the Pit Boss 250, the NASCAR Camping World Truck Series with the Toyota Tundra 225 and the IMSA Lamborghini Super Trofeo North America Series.

Where: Circuit of The Americas, located just south of Austin, Texas, near the town of Elroy, is a 3.41-mile purpose-built road course with 20 turns and an elevation change of 133 feet.

Race Course: Circuit of The Americas is the only FIA-certified Grade 1 track in the United States. NASCAR’s three major touring series will use the full 3.41-mile race course for their respective races. The 20-turn course, which features an elevation change of 133 feet, runs counterclockwise across the rolling hills of southern Texas. The course begins with a steep uphill climb into the iconic Turn 1, nicknamed “Big Red,” which finishes with a hairpin left turn. The field then descends from the Turn 1 hill to navigate a series of fast sweeping esses in Turns 3-6 into a blind corner at Turn 10, taking them to the far end of the circuit and another hairpin at Turn 11. The course then offers a more than half-mile straightaway back towards the pit and paddock area before entering the final technical section of the track where drivers will weave through a series of corner turns in 12-15 where Chase Elliott says a good set of brakes are much-needed. That section is followed by a downhill, multi-apex corner with limited run-off before the final two corners of the circuit, a pair of left-hand bends that return the field to the main straightaway. Click here for a layout of the COTA course.

About the Facility: Circuit of The Americas has hosted many of the most prestigious racing circuits in the world, including Formula 1, MotoGP and IndyCar. This is NASCAR’s first visit to the sprawling motorsports and entertainment venue. In addition to motorsports, COTA has also hosted major entertainment events such as music concerts with Elton John, Taylor Swift and Bruno Mars to name a few, USL soccer events, major league rugby games, major art exhibits, trade conferences, bicycle races and more. The facility also offers a 15-turn Karting track that is open to the public as well as a thrilling Zipline ride for those with adventurous spirits. One of the facility’s main landmarks is the 251-foot tall Observation Tower, which provides a 360-degree panorama of the entire circuit from its central position on the property.

What to Watch: Second-generation racer Chase Elliott has been the man to beat in the NASCAR Cup Series on road courses in recent years, winning four of the last five road course races and five overall in his Cup Series career. The two other Cup Series drivers who have the most road course wins among full-time drivers are both from Joe Gibbs Racing as Kyle Busch and Martin Truex Jr. each have four career road course wins.

Other Cup Series drivers to keep an eye on during this event are Joey Logano, Denny Hamlin, Kevin Harvick and Kurt Busch, who all have strong track records on road courses.

The NASCAR Cup Series opened its 2021 season with quite a bit of parity at play as 10 different drivers have scored victories in the first 13 races.

Chris Buescher, a native of Prosper, is the only full-time Cup Series driver who hails from the state of Texas. There are six Texans who have competed in the NASCAR Cup Series in history, and besides Buescher, the others include two-time Cup champ Terry Labonte from Corpus Christi, his brother Bobby Labonte, Houston’s A.J. Foyt, Midland’s Bobby Hillin Jr. and Fort Worth’s Johnny Rutherford.

In the NASCAR Xfinity Series, drivers to watch include several recent road course winners in that series led by A.J. Almendinger, Austin Cindric and Justin Allgaier, who have all claimed multiple road course wins in recent seasons. Team Penske’s Cindric is the defending Xfinity Series champion and with three wins this season also the current series points leader.

Cousins Harrison and Jeb Burton, sons of former Cup Series stars and brothers Jeff and Ward Burton, respectively, will be competing against each other in the Xfinity Series Pit Boss 250; Harrison drives the No. 20 Toyota for Joe Gibbs Racing and Jeb drives the No. 10 Chevy for Kaulig Racing.

Richard Childress Racing’s Myatt Snider, driver of the No. 2 Chevy in the Xfinity Series, is the son of NASCAR Cup Series television pit reporter Marty Snider.

A pair of road racing specialists, Brazilian Miguel Paludo and Spencer Pumpelly, of Arlington, Virginia, will compete in the Pit Boss 250; Paludo will drive the No. 8 for JR Motorsports while Pumpelly will pilot the No. 6 for JD Motorsports.

David Starr from Houston and Bayley Currey of Driftwood are the only two native Texans on the Xfinity Series roster.

Austin Wayne-Self will try to win one in front of the hometown crowd in the Toyota Tundra 225 Truck Series event as the Austin, Texas native is the driver of the No. 22 Chevy for his family-owned AM Racing team. Self is one of seven Texans in the Truck Series field, including two more Austin residents, Cameron Lawrence, making his Truck debut in the No. 33 Reaume Brothers Racing truck and Logan Bearden, who will drive the No. 44 for Niece Motorsports; Parker Chase, of New Braunfels, who is driving the No. 51 truck for Kyle Busch Motorsports; Vernon, Texas’ Cory Roper in the 04 truck; and a pair of drivers for CMI Motorsports, John Atwell of Azle in the No. 49 truck and Brad Gross of Grapevine in the No. 83 truck.

Former NASCAR Cup Series driver Paul Menard will compete in the Truck race, driving the No. 66 Toyota for ThorSport Racing

Hailie Deegan, 19-year-old rookie in the Truck Series, is the daughter of motocross legend Brian Deegan, and following success in the NASCAR K&N Pro Series and ARCA Menards Series in recent seasons is on the path to becoming the next major female star in the NASCAR world. She drives the No. 1 truck for Gilliland Racing.

Second-generation racer John Hunter Nemechek, son of veteran driver Joe Nemechek, is having a great 2021 season in the Camping World Truck Series and has opened the year with two wins and five top-five finishes to lead the points standings at the controls of the Kyle Busch Motorsports No. 4 Toyota.