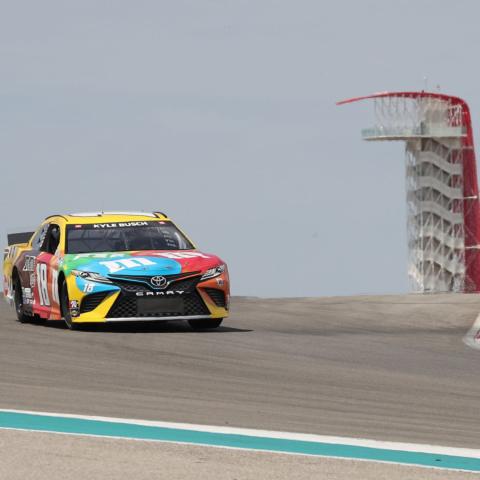 Toyota Racing driver Kyle Busch turns laps in a show car during a NASCAR at COTA production day on Monday, April 19, 2021, ahead of next month's NASCAR at COTA weekend at the fame Circuit of The Americas. CMS/Harold Hinson Photography

Speedway Motorsports announced Toyota as the official vehicles of the NASCAR at COTA weekend, a partnership that includes naming rights to the May 22 Toyota Tundra 225 NASCAR Camping World Truck Series race. Drivers shared their impressions following their first trips around the world-famous road course.

Kyle Busch, driver of the No. 18 Toyota Camry for Joe Gibbs Racing

“It’s definitely an interesting place. It’s a long course – a lot of corners, a lot of high-speed straightaways, heavy braking zones, so it’s definitely going to have its challenges for the drivers as well as the equipment.”

Daniel Hemric, driver of the No. 18 Toyota Supra for Joe Gibbs Racing

“I am blown away. You cannot fully appreciate COTA for itself until you actually come and have a chance to run a lap. We can all have simulation and look at film and do all kinds of stuff, but being on the racetrack, seeing all the elevation, seeing how fast some of the high-speed stuff is, how hard some of the braking zone are and how tight some of the switchback corners are, it’s going to be incredible to see how everybody, all of us – the whole field – can navigate that together. It’s going to be a challenge for these race teams, a challenge for the drivers, but I’m sure we’re up for it. It’s going to be a lot of fun.”

John Hunter Nemechek, driver of the No. 4 Toyota Tundra for Kyle Busch Motorsports

“We’re really, really looking forward to an amazing inaugural weekend. We’re looking forward to seeing these pros hit the track, and I know it’s going to be a lot of fun to watch. It’s high speed, it’s technical and I think it’s a little bit deceiving at how fast this track is, but we’ll find out soon enough.”

The first-ever NASCAR at COTA race weekend will feature a jam-packed three-day schedule of activity. FEVO Friday on May 21 will feature NASCAR Xfinity (NXS) and Camping World Truck Series (NCWTS) practice sessions plus IMSA-sanctioned Lamborghini Super Trofeo Series practice. The schedule for Saturday, May 22, includes NASCAR Cup Series (NCS) practice, plus NXS, NCWTS and IMSA qualifying as well as the Pit Boss 250 NXS race, the NCWTS Toyota Tundra 225 and IMSA’s Lamborghini Super Trofeo Series race. Sunday, May 23, will be the culmination of the weekend featuring NCS qualifying, a second Lamborghini race and the first NCS race in COTA’s illustrious history, the EchoPark Automotive Texas Grand Prix. Announcements regarding on-track timing for the complete weekend schedule will be made at a later date.

Fans can purchase tickets online at NASCARatCOTA.com or by calling the ticket office at (833) 450-2864.