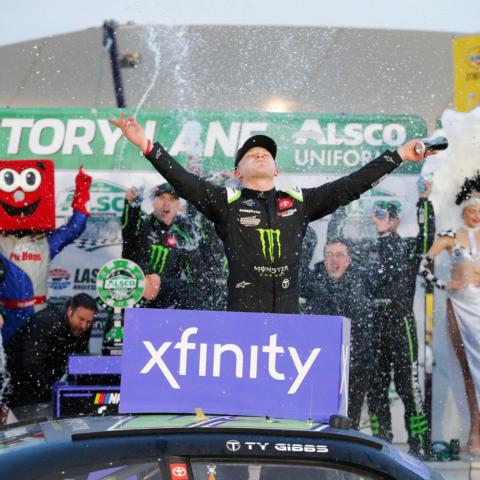 NASCAR driver Ty Gibbs might be in his first full-time Xfinity Series (NXS) season, but the 19-year-old grandson of NASCAR team owner and NFL legend Joe Gibbs has already compiled a resume that ranks him among the favorites to win when the penultimate series takes on Circuit of The Americas (COTA) for the Pit Boss 250 on Saturday.

While he’s made 23 starts in his young career (earning six victories in the process), Gibbs has yet to race at COTA outside of time on the simulator.

“The surface is a little bit old in some spots, and they’ve repaved some spots, so it’s going to be fun to try to manage it,” Gibbs said. “You’re going to have a lot of grip in a couple of corners and way less grip in the other corners… I feel like the track is very technical in its own way, so kind of trying to find the flow for it, it’s going to be a fun time.”

While most up-and-coming racers learn the ropes on oval tracks, Gibbs cut his teeth racing road courses, which he feels may give him an advantage in his inaugural visit to the 20-turn, 3.41-mile circuit.

Gibbs exhibited his road course prowess by winning two of the seven road course events on the 2021 NXS schedule. The first came in his NXS debut on the Daytona road course in February, and then he added another at Watkins Glen. He tied Kyle Busch and AJ Allmendinger for the most road course wins on the season, and he did it in just five starts. He also added a third-place finish at Mid-Ohio.

As for his expectations for the weekend, the goal is simple.

“For me, I feel like I’m always chasing trophies,” he said. “I feel like each race (the goal) is the same going into it. I want to win all of them.”