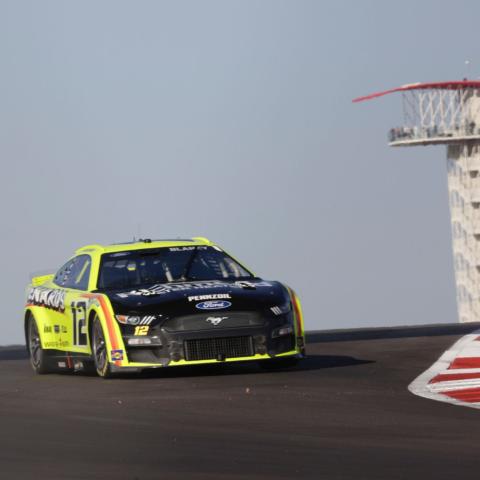 NASCAR Cup Series driver Ryan Blaney powered his No. 12 Team Penske machine to a 132.343-second lap to earn the Busch Light Pole Award on Saturday and will lead the field to green at Sunday’s EchoPark Automotive Grand Prix at Circuit of The Americas. Harold Hinson Photography

After just three laps of practice at the technical 3.41-mile Circuit of The Americas (COTA), things looked bleak for Team Penske driver Ryan Blaney and his No. 12 Menards/Richmond Water Heaters machine. But the 28-year-old got things turned around – quite literally – and ended his morning capturing the Busch Light Pole Award for Sunday’s EchoPark Automotive Grand Prix.

“Talk about an up and down day,” Blaney said. “From putting it in the barriers my third lap and not knowing if the car was killed. I didn’t really know how bad the damage was; I knew the wheel was straight and the tires were flat-spotted. (The team) went through it thoroughly and nothing was bent. I was really lucky.”

During his post-qualifying media availability, Blaney said he wasn’t even sure he’d be able to qualify after he hit in practice and hit the soft wall. But the team recovered and narrowly edged out Trackhouse Racing’s Daniel Suarez by 0.026 seconds for the top spot heading into Sunday’s EchoPark Automotive Grand Prix. Cole Custer, Tyler Reddick and Alex Bowman round out the top five finishers in qualifying.

Apart from recovering from his spin in practice, Blaney said he was impressed with the team’s efforts to make the car better during each round of group qualifying.

“I wouldn’t really say I’m a great road course racer by any means,” he said. “Take the ROVAL™ away – it’s its own deal – and I’ve never been in contention to win one. We picked up half a second in the last round – really proud of that. That’s the thing I really look at out there – getting better every time we go out. We were able to do that today and get the pole.”