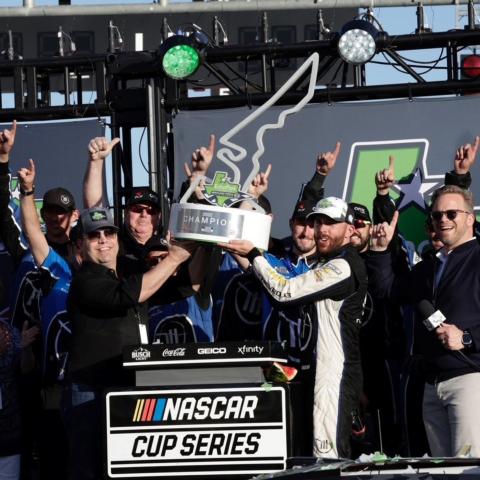 Ross Chastain had the car to beat all day at the EchoPark Automotive Grand Prix, but in the closing corners, the Watermelon Man had to beat and bang his way past a bevy of hard-charging contenders to earn the first career NASCAR Cup Series (NCS) victory for himself and his Trackhouse Racing team.

In his sixth season in NASCAR’s top series, the Alva, Fla.-native led 31 of 69 laps around the famed 3.41-mile, 20-turn Circuit of The Americas (COTA), but the final corners presented perhaps the greatest challenge. Chastain, road course ace A.J. Allmendinger and Alex Bowman all traded paint and positions in the closing lap of overtime. After running off course and falling to third, Chastain drove to the bumper of Allmendinger, sending him into Bowman. With the checkered flag in sight, Chastain emerged victorious, celebrating in victory lane by smashing a celebratory watermelon as has become his winning tradition.

“It’s never tasted sweeter,” Chastain said. “I don’t know how we got back by. I was so worried about A.J. on the second to last restart that I let Tyler (Reddick) drive right by both of us.

“We raced hard. I know (Allmendinger) is going to be mad at me, but when it comes to a win, I wasn’t going to leave anything out there.”

When the dust settled, Hendrick Motorsports’ Bowman finished second, Christopher Bell was third, followed by Chase Elliott and Tyler Reddick. After the incident in the closing corners, Allmendinger fell to 33rd.

Trackhouse Racing owner Justin Marks said the victory is not only a credit to Chastain, but to every employee and person who is part of the team.

“This was an ambitious thing to sort of dream up,” said Marks. “I asked a lot of people who had a lot of experience in this sport to trust me and to believe in Trackhouse. Every single one of those people owns a piece of this victory.

“Just to have an opportunity to be on this stage, to be at this stage in this sport, I feel really, really lucky.”

Sunday’s win was the latest in a string of strong finishes for Chastain and the No. 1 team who rattled off two runner-up finishes and a third-place run in the three weeks prior.

Tickets:
Fans can purchase tickets to the 2023 NASCAR at COTA weekend, including the third running of the EchoPark Automotive Grand Prix, by visiting www.NASCARatCOTA.com. Broadcast information & full weekend schedule will be announced at a later date.