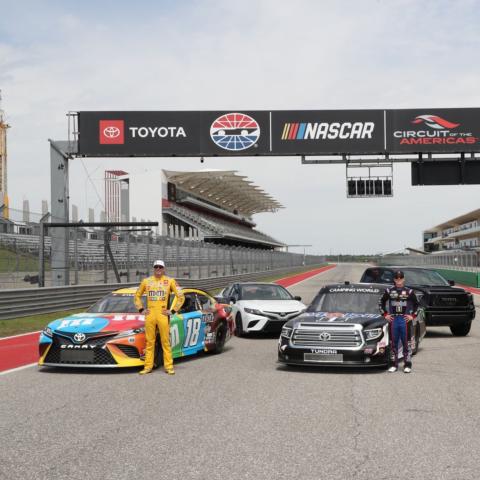 When NASCAR’s three premier national touring series debut at the world-renowned Circuit of The Americas May 21-23, Toyota cars and trucks will lead the fields to the green flags as the Official Vehicles of NASCAR at COTA. Speedway Motorsports officials also announced Toyota as the entitlement partner for the inaugural May 22 Toyota Tundra 225 NASCAR Camping World Truck Series (NCWTS) race.

“We are proud to call Toyota an official partner at several of our speedways across the country,” said Speedway Motorsports President and CEO Marcus Smith. “With Toyota’s North American headquarters located in Texas, it’s only natural to extend our relationship to NASCAR’s first visit to the state capitol of Austin.

“NASCAR at COTA is one of the most highly anticipated and spectacular event weekends on the 2021 schedule,” Smith added. “It’s an honor to saddle up with Toyota for what will be an event experience like no other.”

“Toyota is proud to become the official vehicle of COTA for the track’s inaugural NASCAR race weekend,” said Paul Doleshal, group manager motorsports and assets, TMNA. “The addition of COTA to all three of the national NASCAR series schedules is a great opportunity for Toyota to showcase three of our production vehicles, including the TRD Camry, GR Supra and Tundra as they pace the field each day.

“The Tundra is built here in Texas, so we are thrilled to be able to race it here as well. COTA is located just 90 minutes from one of our largest U.S. manufacturing facilities, TMMTX (Toyota Motor Manufacturing, Texas, Inc.), where every Tundra in the world is built,” added Doleshal.  “This makes our entitlement for the NASCAR Camping World Truck Series race, the Toyota Tundra 225, so important in Tundra’s hometown. We look forward to having our team members join us at COTA to enjoy what is sure to be a great weekend of racing. As we like to say, Tundra is built here, lives here and now will race here!”

TICKETS:
Adult three-day weekend packages start at just $99 for general admission access and $125 for reserved seating to the May 21-23 NASCAR at COTA event weekend. Kids 12 and under can enjoy the entire weekend for just $10. Single-day tickets and three-day weekend packages can be purchased online at NASCARatCOTA.com or by calling the Texas Motor Speedway ticket office at (833) 450-2864.