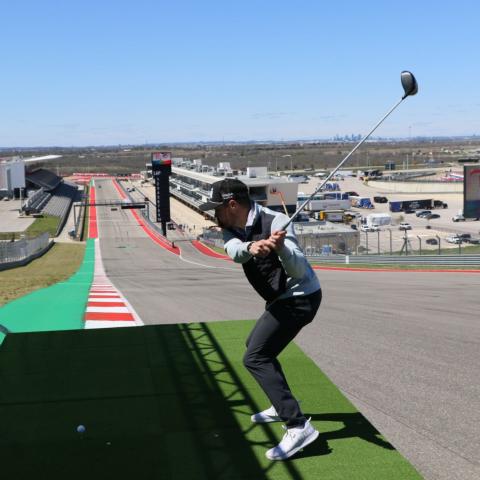 NASCAR Cup Series driver Ricky Stenhouse Jr. tees off from turn one at Circuit of The Americas (COTA) Tuesday as part of "Drive Time," a cross-promotional event between NASCAR at COTA and the PGA TOUR's Dell Technologies Match Play, both being hosted in Austin, Texas this weekend. Jonathan Coleman

Stenhouse Jr., an avid, low-handicap golfer, had the opportunity to enjoy both as he delved into the PGA TOUR world and then shared a slice of his racing livelihood with golfers Marc Leishman, Abraham Ancer and Talor Gooch. He started his day playing six holes with Leishman during a practice round for the Dell Technologies Match Play that begins Wednesday at Austin CC.

Stenhouse Jr. then had Leishman, Ancer and Gooch over to COTA, site of this weekend’s EchoPark Automotive Grand Prix NASCAR tripleheader, to hit shots from atop the iconic turn one, and the JTG Daugherty Racing driver culminated the day with hot laps for the TOUR pros on the challenging 3.41-mile, 20-turn layout.

Battling 20 mile-per-hour headwinds and a 133-foot drop from turn one to the frontstretch, the foursome launched drives from a tee box platform toward the asphalt fairway situated between luxury suites, attempted to hit a Texas-shaped green from 185 yards out and added a few long-distance putts down turn one to the green for good measure.

“This was a perfect day for me to come out and help promote our great event here at Circuit of The Americas,” Stenhouse Jr. said. “Obviously, we’ve got a ton of good racing coming here all weekend, but I also got to go over to Austin Country Club and play some golf at the Dell Technologies Match Play event and just kind of see what they’re going to be up against this weekend.

“The wind was a difficult challenge, but playing some holes with Leishman, giving me some pointers, so hopefully I can take that back to my golf group and have some good runs. But I really enjoyed getting them out here in the Camaro and running around this course that has a little bit of everything. It’s really fast in the front section, tight and technical in the back and we just had some fun today.”

Gooch actually attended the F1 race this past October at COTA and was quite familiar – and pleasantly surprised – of where the tee box platform would be situated.

“My first time here was last fall for that one race and so it’s kind of funny how we were staying at our seats that were in turn one,” said Gooch, who is ranked 32nd in the world with his first career win coming in November at The RSM Classic. “And so, whenever I saw that’s where we were going to be teeing off from, it was just like, this is crazy. Like, you couldn’t have made this up. So, this was kind of a dream come true kind of thing.”

Added Ancer: “That was a really cool experience. I’ve seen this track on TV so many times, and this is the first time that I’m here. And just seeing that (turn one) corner and how steep that is in person; it’s really cool. And trying to hit a driver into this wind was pretty dang tough as well, but it was awesome.”

The highlight of the day for the PGA TOUR players was a couple of hot laps each with Stenhouse Jr. around the road course and also getting an appreciation for the skill of him and his fellow drivers.

“I asked him this morning, I’m like a bloke only to scare him into trying to scare me. And he did,” said Leishman, who has six career PGA TOUR victories including his most recent coming last April at the Zurich Classic of New Orleans. “It was good going through the first probably eight turns, sliding through them. And he can drive. I mean, it’s really cool to be with someone whose so good at what they do and just to see that first hand. It was amazing.”

Added Gooch: “It was awesome. So, it’s always fun to get to meet someone that’s a pro in their sport. And we both have respect and admiration for each other with what we both do.”

Ancer enjoyed the wildest ride as Stenhouse Jr. culminated his hot laps with doughnuts on the frontstretch.

“He’s a monster, man,” said Ancer, who is ranked 20th in the world and the first Mexican golfer to ever move into the top 100 of the Official World Golf Ranking. “That was a lot of fun. I love cars and just how good and precise they are and how fast; I mean it’s pretty mind blowing. It is a lot of fun.”

While the TOUR players prepare for their upcoming competition, Stenhouse Jr. will be doing the same. The Cup Series hits the track Saturday for a one-hour practice (9-10 a.m. CT) followed by Cup qualifying at 10 a.m. Sunday’s EchoPark Automotive Grand Prix will take the green flag at 2:30 p.m. (TV: FOX).

“I think, you know, COTA this weekend is going to be perfect weather for us,” Stenhouse Jr. said. “I felt like we had a lot of obstacles to overcome last year. But this is a course that all of us drivers are looking forward to coming back to. We’ve got a brand-new race car that I feel like it’s made for this type of racetrack, and I think we’re going to put on a really good show, got really good concerts before and after the races. So, I hope everybody comes out and enjoys a great weekend.”