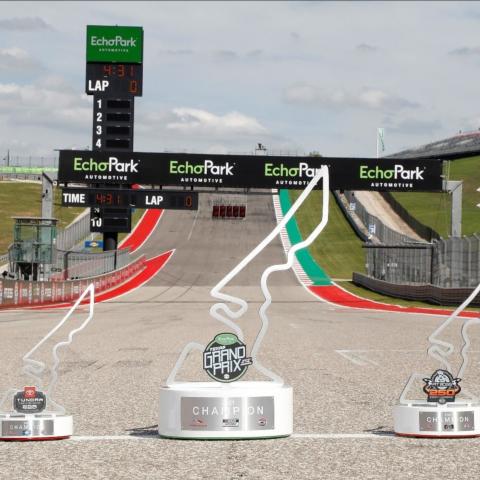 The race winners from NASCAR’s three national series who emerge at this weekend’s inaugural NASCAR at COTA event will have no issues identifying the hardware in their personal trophy collection.

Jostens, the industry leader in custom-created trophies, produced the trophies for the NASCAR Cup Series, Xfinity Series and Camping World Truck Series races, with each showcasing a re-creation of Circuit of The Americas' signature 20-turn, 3.41-mile layout that the winners will need to conquer to raise these exquisite trophies in Victory Lane.

All three trophies prominently feature a brushed aluminum replica of the COTA permanent road course as the focal point. The track on each trophy is waterjet cut and then hand finished, a process that takes more than 20 hours for each to be completed.

Each track will sit on a circular super mirror white powder-coated acrylic base. The base features the logos of Speedway Motorsports, Circuit of The Americas and the respective NASCAR series on a brushed aluminum plate. A colored logo of the respective race entitlement sponsor – EchoPark Automotive (NCS), Pit Boss (NXS) and Toyota Tundra (NCWTS) – will sit atop the base in front of the lower portion of the track.

Jostens also produces the season championship trophies for each of NASCAR’s national series, including the prestigious Bill France Cup in the NASCAR Cup Series, and college football’s Heisman Trophy among its numerous projects.

To obtain more information about the NASCAR weekend, download facility and parking maps and check out a list of FAQ’s about the event, please click here.