Elliott, Keselowski and Truex Jr. Fuel Excitement for the Inaugural May 21-23 NASCAR at COTA Weekend 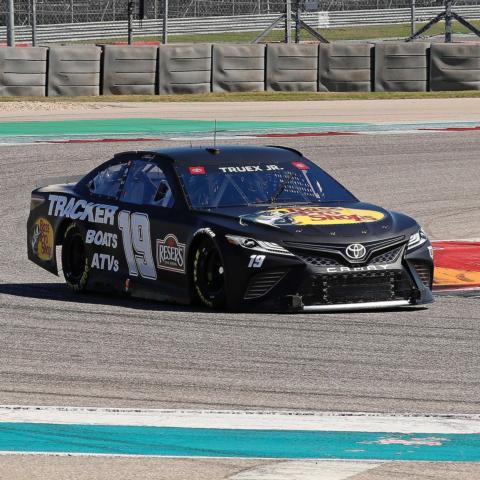 For the first time at the iconic Circuit of The Americas, three former NASCAR Cup Series champions shook down the 20-turn, 3.41-mile long course in stock cars on Tuesday. Part of a Goodyear tire test in preparation for the inaugural May 23 EchoPark Texas Grand Prix, the showcase of speed saw Chase Elliott, Brad Keselowski and Martin Truex Jr. provide a preview of what to expect when NASCAR’s best battle on the series’ newest circuit.

Chase Elliott, driver of the No. 9 Chevrolet for Hendrick Motorsports
“The track’s fun. It has a lot of character to it, I feel like. I’ve never been here, never seen it in person before today and really haven’t watched a ton of races here, so it’s really been a pretty steep learning curve for me, trying to piece together all the different parts of the track and understand where you need to be good and how to make it flow. I’m trying to learn, but it’s been fun. I hope people (fans) will come out and give it a chance. It’s a different type of racing.”

Brad Keselowski, driver of the No. 2 Ford for Team Penske
“One of the things about this track here in Austin, it’s got a couple of key action spots. Turn one is designed as though a fan said, ‘how can I have the most calamity in that corner on the start?’ So there’s a couple of things – first off, it’s uphill, which helps the car stop, so it encourages the driver to try to out-brake another driver, which is big on a restart or a start because all of the cars are already so close together. Second thing is, it’s really wide on entry, so it’s almost impossible to block because there’s just a lot more racetrack. And then, of course, the third part is it’s a super slow corner meaning you have to use a lot of brakes to get through there. So, like I said, almost like it was intentional – I’m sure it was intentional – to create some epic starts. I think you’ll see that here.”

Martin Truex Jr., driver of the No. 19 Toyota for Joe Gibbs Racing
“I feel like this is kind of part Sonoma, part Watkins Glen. There’s some fast sections, some slow sections. It’s got the older asphalt, wearing tires out more like Sonoma, but it’s got the really high-speed straights and the really hard braking zone like Watkins Glen going down the backstretch. It’s a mix of both. It’s got a little bit of a blind corner, up-and-down elevation change like Sonoma. It’s a pretty unique place … It’s all about markers and points on the track and when you turn in and what gear you’re in and how much speed you’re carrying and finding the brake points and all those things. It takes over two minutes to get around here, so if you make a mistake, you’ve got to wait two minutes to correct it, and you can’t forget it when you come back around. It was interesting to do that and a lot of fun to do that.”

The first-ever NASCAR at COTA race weekend will feature a jam-packed three-day schedule of activity. FEVO Friday on May 21 will feature NASCAR Xfinity (NXS) and Camping World Truck Series (NCWTS) practice sessions plus IMSA-sanctioned Lamborghini Super Trofeo Series practice. The schedule for Saturday, May 22 includes NASCAR Cup Series (NCS) practice, plus NXS qualifying and the Pit Boss 250 NXS race, as well as NCWTS and Lamborghini qualifying and races. Sunday, May 23 will be the culmination of the weekend featuring NCS qualifying, a second Lamborghini race and the first NCS race in COTA’s illustrious history, the EchoPark Texas Grand Prix. Announcements regarding on-track timing for the complete weekend schedule will be made at a later date.

Fans can purchase tickets online at NASCARatCOTA.com or by calling the ticket office at (833) 450-2864.