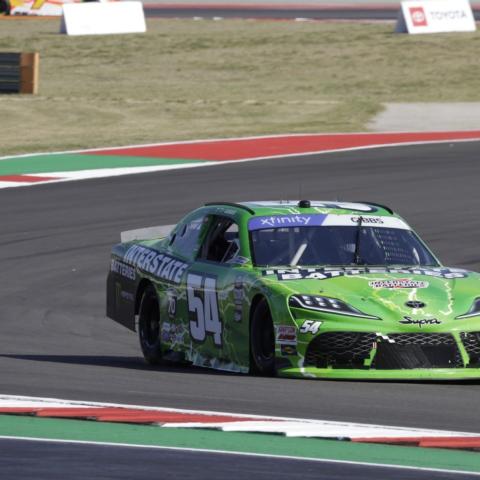 NASCAR Xfinity Series (NXS) rookie Ty Gibbs is trying to be the best person he can be, and – on the track, at least – he’s been pretty close to perfect this season. The 19-year-old Charlotte, North Carolina native powered his Joe Gibbs Racing Toyota to the pole during Pit Boss 250 qualifying at Circuit of The Americas (COTA) on FEVO Friday.

In five starts this season, Gibbs has already notched two wins. Friday, he added his first pole of the season with a blistering two-minute and 14.52-second lap in the same No. 54 Toyota Supra that Kyle Busch drove to victory in the inaugural Pit Boss 250 last year. Gibbs crossed the line a half-second faster than NASCAR Cup Series regular Ross Chastain, who will start on the front row in his TicketSmarter Chevrolet. A.J. Allmendinger, Josh Berry and Josh Bilicki round out the top five.

“I think we’re pretty close to what Kyle had last year,” Gibbs said after qualifying. “We just have to make some minor adjustments. The guys work so hard. I’ve got all the best guys. They work really hard, and we’ve got a good car.”

While Gibbs looks forward to challenging for his third win of the young season on Saturday, he said fans are in for a treat on and off the track at COTA.

“It’s cool to be here,” he said. “There’s roller coasters over there; People were ziplining up in turn one, which is pretty crazy too. There are just a lot of cool attractions. It’s one of those races that’s just fun. You’re not stressed out. You can take a look at the scenery and have a good time.”

CREED TAKES TOP SPOT IN XPEL 225 QUALIFYING
Despite eight Camping World Truck Series (NCWTS) wins in 75 starts, Sheldon Creed, 24, has never started on the pole. That will all change on Saturday as the Alpine, Calif. native leads the field to green and around the 3.41-mile, 20-turn circuit in the XPEL 225.

“I’m really happy with how it’s driving,” Creed said of his No. 20 Wiley X Chevrolet. “We really haven’t changed a whole lot. I feel like – with the repave – there’s a lot more grip in some areas. I don’t feel like the tire fall off is as bad, at least for me. I feel like I got better after the second or third lap.”

Creed will start alongside Zane Smith on the front row when the NCWTS kicks off a Saturday doubleheader that also includes the NXS Pit Boss 250. Alex Bowman qualified third, Parker Kligerman fourth and Kyle Busch fifth.