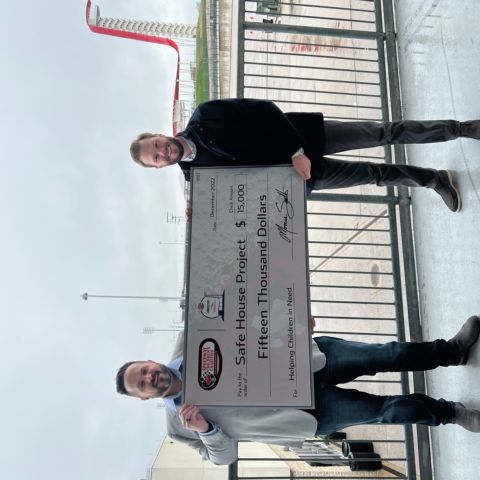 NASCAR at COTA Executive Director Bryan Hammond (left) presents a $15,000 check from Speedway Children’s Charities to Chris Hargis of Safe House Project (right) as a result of fundraising during the March 25-27, 2022 NASCAR weekend at Circuit of The Americas in Austin, Texas.

Speedway Children’s Charities (SCC), the official charity of Speedway Motorsports, has granted $15,000 to Safe House Project to train 24 Austin-area clinics in the fight against child sex trafficking in the United States.

“Our partnership and grant from Speedway Children’s Charities allows us to train healthcare workers in vulnerable communities across Austin to identify trafficked children, help them escape and get them the services they need to break the cycles of victimization,” said Safe House Project Chief Executive Officer Kristi Wells. “Reports show that hundreds of thousands of American children are trafficked in Texas and only one percent are ever identified. However, more than 90 percent of victims are seen by healthcare workers while being trafficked. This partnership is vital to combating trafficking and ensuring hope, freedom and a future for victims of child trafficking in Austin and across Texas.”

The grant resulted from generous donations received during the second annual NASCAR weekend at Circuit of The Americas (COTA) in March 2022. Race fans who attended NASCAR at COTA took park in fundraising opportunities and events including sales of limited edition track tokens on RaceDayNFT.com, thrilling rides-of-a-lifetime around the 3.41-mile, 20-turn road course in an official NASCAR at COTA Toyota pace car, bids on unique memorabilia and one-of-a-kind experiences during a Live Auction and donations from fan assistance golf carts.

“Safe House Project is doing such important work in the Austin community, and we are thrilled to be able to give this money to help in their fight to educate individuals and protect local children,” said Speedway Children’s Charities National Executive Director Lisa Starnes. “We are humbled by the generosity of race fans, and we are already hard-at-work planning fun opportunities for fans to help us raise more money through Speedway Children’s Charities at COTA this March.”

Race fans can take part in fundraising efforts during this year’s NASCAR at COTA weekend, March 24-26, featuring the NASCAR Cup Series, NASCAR Xfinity Series and NASCAR CRAFTSMAN Truck Series. Dates and details for event weekend fundraising opportunities will be announced at a later time, but donations can be made any time at SpeedwayCharities.org/Donate/#COTA.

Tickets:
Fans can purchase tickets and camping for the NASCAR at COTA weekend by visiting NASCARatCOTA.com. The full weekend schedule will be announced at a later date.