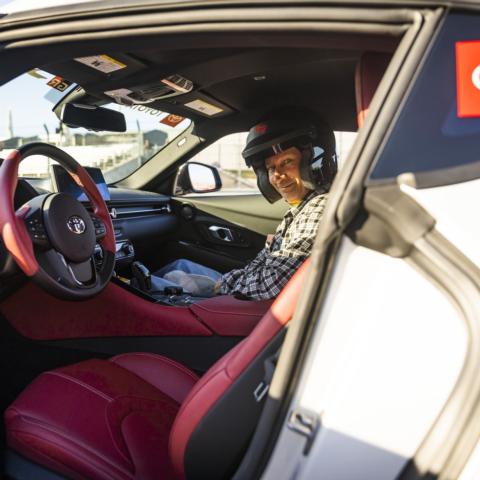 Experiencing Hot Laps around Circuit of The Americas (COTA) from the passenger seat of an official NASCAR at COTA Toyota pace car was one of the many ways race fans could help Austin area children through Speedway Children’s Charities during the March 25-27 NASCAR weekend in Austin, Texas. Adam Glanzman

The March 25-27 race weekend at Circuit of The Americas (COTA) may have been NASCAR’s second visit to Austin, Texas, but it was a weekend full of firsts. On the track, NASCAR Cup Series (NCS) driver Ryan Blaney and NASCAR Camping World Truck Series (NCWTS) driver Sheldon Creed earned their first career poles on a road course in their respective series; Zane Smith earned his first career NCWTS road course win and Ross Chastain captured the first career NCS win, not only for himself, but for his Trackhouse Racing team as well. Off the track, race fans had, for the first time, the opportunity to make a difference in the lives of Austin-area children, raising more than $15,000 for Speedway Children’s Charities (SCC), the official charity of Speedway Motorsports.

Prior to the event weekend, Speedway Motorsports launched a limited number of track tokens on RaceDayNFT.com, Speedway Motorsports’ fan-focused digital collectible marketplace, that sold for a donation to SCC. During the three-day weekend, fans experienced a thrilling ride-of-a-lifetime around the 3.41-mile, 20-turn road course in an official NASCAR at COTA Toyota pace car during Hot Laps, bid on unique memorabilia and one-of-a-kind experiences during the Live Auction and made SCC donations on fan assistance golf carts.

“We are so grateful for the generosity of race fans who took part in our fundraising events during the NASCAR at COTA event weekend,” said Speedway Children’s Charities National Executive Director Lisa Starnes. “The more than $15,000 that was raised will return to the Austin area in the form of grants to deserving nonprofits helping children in need. This is an amazing accomplishment for the first time we’ve activated at COTA. We thank every fan who participated in an event to support SCC and look forward to doing more in 2023!”

Tickets:
Fans can purchase tickets to the 2023 NASCAR at COTA weekend, including the third running of the EchoPark Automotive Grand Prix NASCAR Cup Series race, by visiting NASCARatCOTA.com.